The Congregation was created in 1843—as GORBALS UNITED FREE CHURCH—by
Disruption-Year seceders from Gorbals Parish Church of Scotland. These included
most of the Parish Church’s Kirk Session; around half of its parishioners; and its
Probationer, Robert Bremner, M.A., whom they elected as Minister (he stayed with
them for 52 years);

The U.F. Congregation erected its own church (1844) at the corner of Commerce
Street and King Street (now Kingston Street); sold it in 1891as being too small;
then met for a time in Gorbals National Halls, with hopes (which faded) of raising
a big Temple in Glasgow. Afterwards, the Congregation was left with no home, no
minister, and depleted membership; but it rallied, and grew, under the ministry of the
Rev D C. Macnicol, B.D.; and, in 1898, built a handsome church at 95 South Portland
Street.

In 1929 occurred the national Union of the Churches. Grafted by this into the Church
of Scotland; the Congregation renamed itself MACNICOL MEMORIAL CHURCH OF
SCOTLAND. Following from that Union, the Kirk now had five Gorbals congregations;
none of them strong. More than it could support. Mergers were mooted.

In 1933, Macnicol Memorial; picked for closure; received and accepted a novel
invitation from the Kirk’s National Extension Scheme: “Stick together—but not in
Gorbals! Relocate to the new suburb of Croftfoot and be the founders of the new
charge there.”

And so, in 1934, Macnicol Memorial sold its Gorbals building (to the Jewish Institute
for use as a synagogue); and moved, headed by its then minister, John Guthrie, B.D.,
and with its name, courts, and organisations all intact; and became Croftfoot’s parish
church. (Not until 1953 was the name changed to Croftfoot Parish Church).

At 11am on Sunday 7th October 1934; in a wooden hall where the Columba Hall now
stands; the Congregation held its first service of public worship in Croftfoot.

Opened in 1936; based on the Roman basilica (an oblong public hall in which round-arched colonnades separate the principal parts); our church has a high central nave, flanked by two aisles, and, at the east* end, a chancel. (*East in design principle. Actually south-east). After Emperor Constantine gave Christians freedom of worship, in 312AD, they often chose this style for their churches. The architects were John Keppie and Henderson, Glasgow. John Keppie (1862-1945) was President of the Glasgow Institution of Architects. His name is linked with that of Charles Rennie Mackintosh, whom he engaged as a draughtsman and subsequently as a partner. 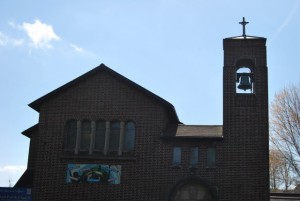 The Bell Tower. Near its base are the foundation stone, laid in 1935, and the dedication cross. The bell, cast for us in 1946, is engraved ‘To the Glory of God and in Memory of the Fallen 1939-1945″ The Front Doorway. Carved here are Old Testament themes recalling God’s covenant with his people, declared to Abraham and reaffirmed to Moses; viz.: 1. the Burning Bush, with the text nee tamen consumebatur “But it was not consumed” (Exodus 3, 1-3). 2. a young ram and a sheaf of corn – animal and grain symbols of sacrificial offering (Exodus 11.15 and 23.13).

Children’s Corner. (Vestibule). Here each of the young people of 1935 cemented into place one of the 4,000 bricks bought by way of their “penny-a-brick” money-collecting campaign. Structure and Contents. The chancel underwent change in 1963, when its platform was extended outwards towards the nave and the pulpit was moved a yard or so towards the north aisle. At the same time, the east window, composed of three tall lancets, was closed up and covered by the blue velvet curtain and cross which you see today. Otherwise, aside from the addition of pew cushions and carpeting; the sanding-down and varnishing of the formerly grey-painted pews; and massive alterations to the organ’s internals the interior is much as it was in 1936.

Symbolic church art is not strongly to the fore in our Presbyterian tradition. So it is intriguing to find, in our building’s ornamentation, symbols which, like signposts along the way, trace a visionary journey into faith, leading from old towards new, from darkness towards the light. Pillars. On the chancel pillars upraised heads and bowed heads stand for Praise and Prayer. The nave pillars display the symbols of Matthew, Mark, Luke and John: i.e., a man, a lion, an ox and an eagle. This conception comes from the strange winged and hoofed living creatures pictured in Ezekiel and Revelation; which early Christian theologians (rightly or wrongly) connected with the Evangelists. (Ezekiel 4.12 & 10.14. Revelation 4.6-8). The pillars say: “The Church is upheld by the Gospels, Praise and Prayer.” The nave pillars point also, on their side and rear panels, to verses from the last chapter of Revelation. Starting at the “Matthew” pillar, we see, in turn: 1. A convoluted ribbon with visible ends: I am Alpha and Omega, the first and the last”. (Rev 22.13).” 2. An endless ribbon: Eternal Life (Rev 22.5). 3. The Tree of Life (Rev 22.2). 4. The Fruit of the Tree of Life (Rev 22.14). IHS. The “MS” monogram, on the pulpit, abbreviates the Greek word IHSOYS, which means “Jesus” The Dove. On the Font. Portrayed as haloed, and descending, the dove recalls the Holy Spirit’s descent in that form at the baptism of Jesus. Octagons. The pulpit, font and nave pillars are eight-sided, as are the frames of the IHS monogram and of the (heraldic) Fretted Cross in the gallery frontage.” Jesus arose from death eight days after his entry into Jerusalem). The theme here is “Rebirth”. (John 3.3-8). Wheel. (Communion Table). The wheel with its central hub and twelve radial segments recalls the Last Supper, at which Jesus signalled the New Covenant. Tliis is My body, which is given for you. Tliis cup is God’s new covenant sealed with My blood, which is poured out for you. (Luke 22. 19-20). A Q.